2012 JNK Llama Babies
It is always a long wait when you are watching for the babies to come. Knowing you carefully matched a sire and dam and what that perfect match potentially will cria't. This result should be the epitome of what you are breeding toward after careful and strategic planning. We continue to be blessed with beautiful animals and wonderful buyers! 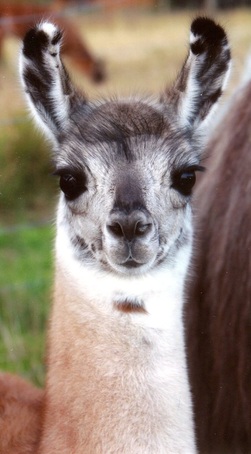 A home run from our favorite classic pairing. Sedona came into the world with a beautiful classic coat and SPOTS! The 3rd pairing of Toby and Sunshine, created this beauty. Her older sister "JNK Tobias's Caldera" is in our keeper herd and is Niki's up and coming performance prospect. Caldera was in the top 2 on the ILR performance lists for 2011 and the 2011 ILR Gathering of Friends Reserve Grand Classic Female. Sedona's dam was the 2009 NW Region High Point Classic and many time halter class winning female.

This girl has really old and proven packing lines! A bloodline combination with no linebreeding and such packing greats as Rocky Mountain Handsome, Rocky Mountain Jester and Bett's Supaya. At this time, she isn't for sale.

*Unfortunately we lost Sedona on 10/6/13 to a potential blockage or internal bleeding. Despite having two vets examine her, they could not sort out her issues. She was a darling and sweet girl who is sorely missed here. 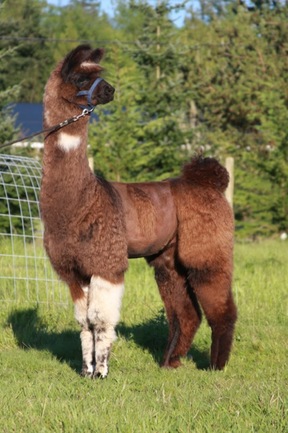 Oso is out of one of the best producing ﻿﻿Eagle﻿﻿ daughters owned by our New Zealand friends, Terry and Sandra Spekreijse. Kestrel is also dam to the many times champion and 4 time best of show male, "Serenity Park's Ramazon." Ramazon was one of the top adult males in the country in 2012 on the ILR-SD top ten list. Oso's sire is our outcross full Peruvian partnership male, Huaycool. Huaycool kids have been cleaning up in the showring across the country and there is not a lot of this line available as we do not do outside services to him. Our own JNK Huaycool's Rosabella has won many grands and reserves this year and achieved all of her ILR halter titles in one show season. She also won novice reserve grand in huge classes (32+) the first time she was shown in them.

There are lots of performance and driving animals in this pedigree. Oso's dam, brother, grandfather, 2 grand uncles and 8 aunts and uncles all drive. His dam's grandfather was also a driving llama and one of the first ALSA Champions. This is a very strong performance, conformation and driving line.

We expect Oso to do great things and are really impressed with his balance, substance, fiber and disposition. He has his grandfather's (Eagle) presence and style already. Oso has curly pencil locks to the skin on a stretchy and solid frame. He will mature into a substantial, smart and beautiful male. If sold, he would be a heck of a show/performance prospect prior to being used for breeding. Frankly, the potential here showing him is exciting, but with owning dad and his half brother and his mom still living here until importation, it is unrealistic to keep him just for a "show high." However we will not let him go to just anybody as his talent should not be wasted. 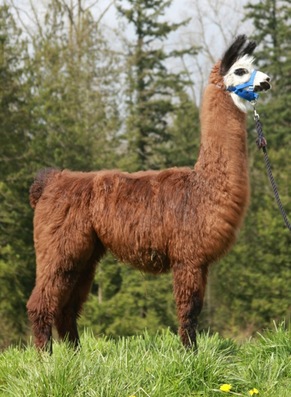 ﻿How about a combination of two of the winningest lines in the show world? By our top producing *Sipan son Marisco, who has racked up eight best of shows in limited showing. Dam is our top showring winning Eagle daughter, who has won everything in both ILR and ALSA. The 3/4 sibling to this boy (Serenity Park's Ramazon) has won Reserve and Grand in every halter class he had entered except one since 2010 and has six Best of Show titles to his credit. He will go to New Zealand eventually.

A who's who of lines, *El Fuerte, *Sipan, Isle Eagle, Ivory Pond's Aladdin, Legend's Rammas, Bauernheim's Nina and more. *El Fuerte has produced more champion descendants than any other line in history. Isle Eagle was the top show llama in the nation and still holds more titles and wins than any llama in history. Eagle kids are still winning in the showring today. Ivory Pond's Aladdin was known for producing excellent fiber and stretch. Legend's Rammas is an old Bauernheim line known for pencil locked fiber and structure. If you are a fiber junkie, you know what these lines can do if bred right!﻿

Zela is a Pet Partners registered therapy llama too! 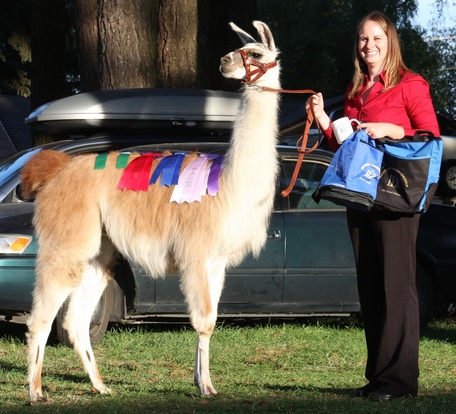 Tobin is a classic male by our top pack male Toby and out of our 2008 National Reserve Grand Champion Light Wool, Inca (Spook line) daughter. Legacy has one of the shortest coats on the farm, perfect for packing and grooming. Toby and Legacy both had excellent show records in conformation and both hail from some very old and proven packing lines.

Tobin is very leggy, tall and short coated, he has potential to be a great packer. His 2011 full brother "JNK Tobias's Baker Mt" resides in Colorado now and is starting his packing career there. 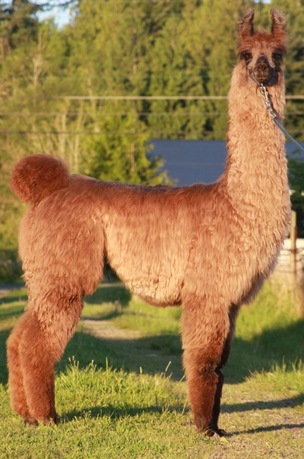 Normandie birthed a beautiful baby girl. Hands down, Normandie has been our best producing woolly program female. Her cria are all over the country and have cleaned up in the showring. We sell her babies before they are even born. Normandie's offspring are some of our most asked about animals in our herd. Her sons and daughters are producing in Australia and across the United States.

There is no linebreeding in this cria, it will be a highbred of English, Peruvian and North American lines. All of the full siblings are in breeding programs already and are LOVED!