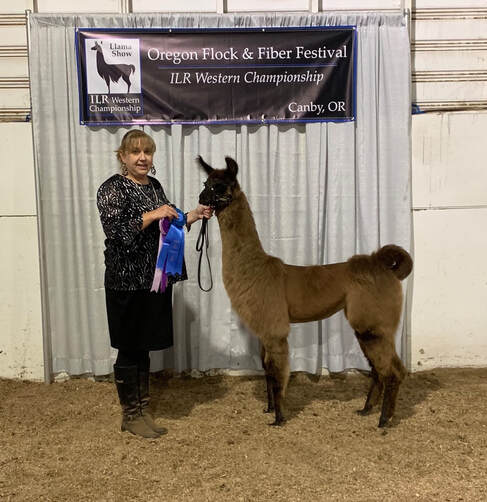 Huaycool x ​JNK Normandie's Gevalia
A cross of several generations of our very best and proven producers, Ferrara has so much potential!

This female is our last offspring from our full Peruvian herdsire Huaycool.  He was purchased at the famed Hinterland Llamas 2010 dispersal sale.  Huaycool was an ALSA Halter Champion and already a herdsire of distinction when we acquired him.  Our JNK Huaycool's Rosabella (Huaycool x Bros Normandie) has been one of our most award winning and best producers in our herd and she is a half sister to Ferrara.  Rosabella is also Ferrara's aunt (Dam's are half sisters through Bros Normandie).

Ferrara's dam is owned by our New Zealand friends Terry & Sandra Spekreijse. JNK Normandie's Gevlia is an ILR Halter Champion and has been Complex registered for therapy work in the past. She is a pocket pony type llama who loves people.  Gevalia has fine fiber that when spun up is like butter to your hand.  Like her sire and siblings, Gevalia has stick straight legs and nice overall balance.  Her dam line goes back to the famed Bauernheim Llamas breeding program and she has their signature refined look.  All of Gevalia's siblings have been consistent halter and performance winners (JNK Marisco's Macchiato, JNK Huaycool's Frisella, JNK Huaycool's Rosabella, JNK Marisco's Venicia, JNK Marisco's Ducati and many more).

Bros Normandie was one of our very best producing woolly females.  She is grandmother to Ferrara and dam to Gevalia and our Rosabella.  Normandie had many offspring and was a heavy milker and easy birthing female.  Her offspring have done exceptionally well in the showring (Halter, Performance and Fleece) and Normandie produced 3 Pet Partners Complex rated therapy llamas!

Our senior herdsire Marisco is the grandfather to Ferrara.  Marisco is by a two time ALSA National Halter Champion and is a grandson of the best producing full Peruvian male *El Fuerte.  Marisco is an ILR and ALSA Halter Champion, many times best of show winner, Get of Sire/Production Pair winner and Pet Partners Complex Registered Therapy Llama since 2006.  He is hands down our sweetest and calmest llama on our farm!  Marisco was still winning grands in halter at age 18!  With COVID, he missed showing at age 20 and we had planned to take him to show in halter.

We do not keep very many offspring from our core herd.  Given this was our last Huaycool offspring and our first Marisco grandkid, we decided to hold onto Ferrara.  Also, there was just something about her that Niki liked and she needed a new show llama!

Ferrara did not disappoint us at her first show at age 5 months.  She pulled a Grand Champion in silky wool females and Reserve Grand Champion in Fleece on too!  At her second show as a two year old, she pulled a Best of Show.  She finished her third show Western Championship Champion Medium Wool Female and completed all the legs of her halter titles.

Her first time out, Ferrara received a perfect score on her Pet Partners therapy evaluation.  Given her grandsire, dam, siblings, aunts and uncles are all accomplished therapy llamas it isn't too surprising!