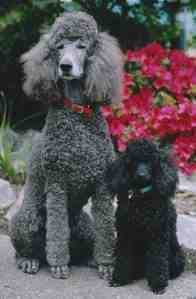 We love our Poodles! Niki grew up with Miniature Poodles and Jeff informed her the minute they got married that they would NOT own a Poodle! Then he said a large black one would be okay....and well.....the rest is history!   Hailee was our first born Standard and love of Jeff's life until she passed in October 2014.

Daisy is a tough little Poo who loves to wrestle with her big sister and play frisbee. Any other time is spent keeping track of Niki whom she adores. She has been to agility and obedience classes. Daisy is black and her Father is from a well respected Poodle program Farthing Poodles. Niki was going to spay her, but her vet talked her out of it.  Daisy gave birth to a litter of pups August 17, 2007 (there were two boys and two girls). The sire to Daisy's pups was Pita-P Poodles AM Champion Foxmore Stetson.

In January 2010 we added another Standard Poodle to our family from Carrington Poodles. Sicily is from a long line of show winning Standards. Her sister was the number 3 Poodle in Canada for 2011. Sicily however is happy just being a farm Poodle and tormenting Daisy. Sissy had a litter of pups on Christmas Day 2013.  While they were cute, they were a lot of work.  All of them got super homes that we hear from!

We highly recommend Poodles as companion dogs. They are clean, don't shed, smart beyond belief and always entertaining. Our dogs can be lap dogs, but are also happy farm dogs!  Do not even bring up the silly "Doodle" crosses to us.  What is the point when you can have a real Poodle that is perfect already? 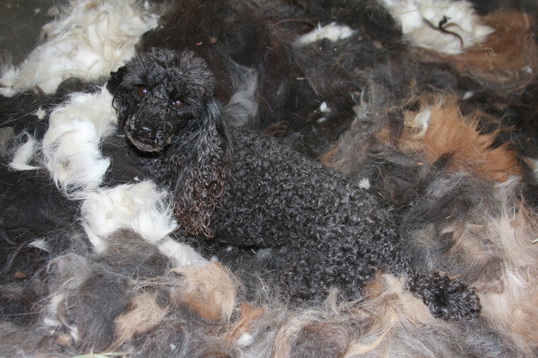 Daisy in the middle of our sheared wool discard pile!  She is soooo helpful! 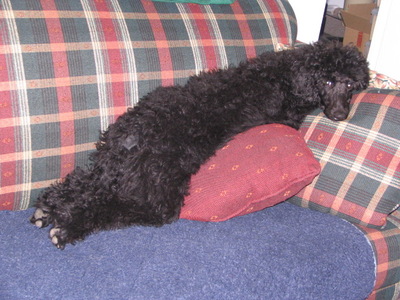 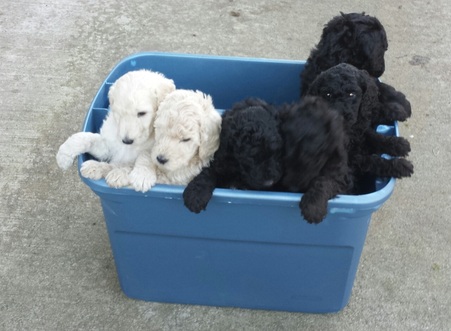