2015 JNK Llama Babies
It is always a long wait when you are watching for the babies to come. Knowing you carefully matched a sire and dam and what that perfect match potentially will cria't. This result should be the epitome of what you are breeding toward after careful and strategic planning. We continue to be blessed with beautiful animals and wonderful buyers! 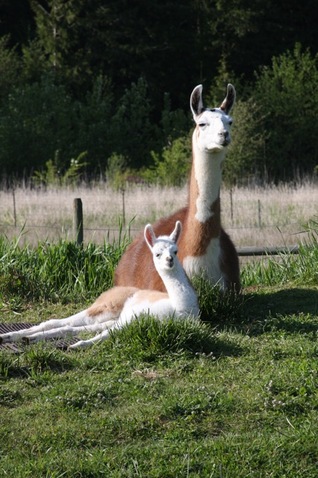 Our first Toby daughter offspring!  This is a second generation JNK llama pack offspring descended from our exceptional classic male MPL Anders Tobias.  The sire of this girl is our sweet MPL Sky Rocket son, CTL Sulu.  Kalosi the dam of this lovely girl, is one of our precious keeper Toby daughters that was born and raised on our farm.  Kalosi is a reasonably sized girl with nice straight legs and a super disposition.

You could not ask for a better first time birth experience.  Kalama weighed 30.7lbs and was up and nursing before we even got home after being gone only two hours!  Kalosi has tons of milk and is a very attentive and good mother.  Grandma to this girl was also an excellent mother and had loads of milk.  These traits do not happen by accident!

Kalama already is super mellow and has a beautiful short classic coat like her mother and grandmother.  With her long and straight legs, we know Kalama is going places!  She will be going to live with her aunt "JNK Tobias's Laka" at Tim and Kendara VanNorman's house.

Kalama is named after the area in southern Washington State where her grandfather Anders Tobias was purchased from.  Information on it can be found HERE:

The story endorsed by the city Kalama is that the city was named after the nearby Kalama River which took its name from a Native Hawaiian ﻿named John Kalama. An alternate story, from James W. Phillips Washington State Place Names states, "General J.W. Sprague of the Northern Pacific Railroad named the town in 1871 for the Indian word calama, meaning "pretty maiden." There is an additional story. Gabriel Franchere in 1811 wrote of the Indian village at the mouth of the Kalama River, and he said it was called Thlakalamah (This story predates all of the others).

JNK Tobias's Cavender (M)
ILR#288699
MPL Anders Tobias x ﻿Rocky Mountain Sunshine﻿
DOB 6/11/15
***Sold Congrats Janet***
​
A super male from our favorite classic pairing. This guy came into the world with a beautiful classic coat and correct conformation. The 5th full pairing of Toby and Sunshine, created this substantial male. His older sister "JNK Tobias's Caldera" is in our keeper herd and is Niki's driver, packer, therapy and performance girl. Caldera was in the top 2 on the ILR performance lists for 2011 and the 2011 ILR Gathering of Friends Reserve Grand Classic Female.

The dam of this male was the 2009 NW Region High Point Classic and many time halter class winning female. His half brother JNK Cayetano is one of our junior pack herdsires and has been a stellar show/therapy llama for us too!

This male has really old and proven packing lines! A bloodline combination with no linebreeding and such packing greats as Rocky Mountain Handsome, Rocky Mountain Jester and Bett's Supaya. At this time, he isn't just going to anybody.

Unfortunately, Cavender's mom had Cancer and he was her last baby.  Despite looking fabulous for 19, ultimately she had to be euthanized.

Cavender is named after the awesome western stores in Texas.  We had a super time down there in 2014 and thought that would be a cute name! 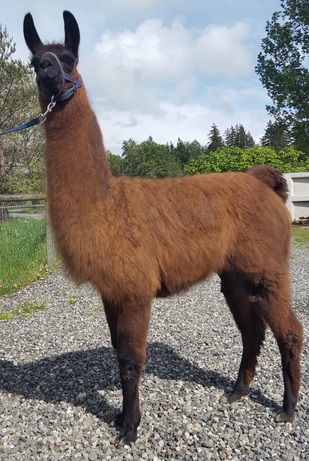 Sulu kids have been pretty sweet and mellow, just like their dad.  Legacy is a very correct and upright girl with a beautiful short classic coat.  Her kids have all had these same positive traits.

This young male already has long legs and a nice short classic coat.  He has several people that were on the waiting list for him, so he is spoken for! Most everyone that meets him comments on how mellow, sweet and beautiful he is.

Fin is named after the northern most peak in the San Juan Islands "Finlayson Peak."  His new owner Janet frequently hikes there, so it has extra special meaning and significance.  For more information go HERE.