I Only Want a Pet Llama, NOT a Show Llama! 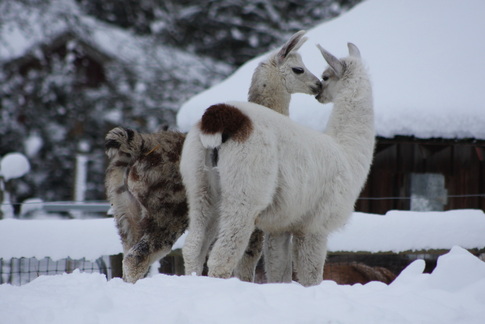 If I had a quarter for everytime someone told me, “I just want a pet llama, not a show llama” I would be rich!

Breeders of all species get a bad rap all the time because of the amount of irresponsible animal producers out there. We always hear on the news about puppy mills and other animal abuse cases. Many sources promote that we should only be getting dogs and cats from shelters and rescue. On a recent trip to Universal Studios, they announced at the end of the animal actor show, to be sure and adopt animals from your local shelter. While I applaud rescue, it brings a whole other set of issues at times.  I actually do a fair amount of llama rescue and re-homing, but realize that they are not for everyone.

Reputable breeders spend a lot of money on nutrition and proven genetics. They also put far more into care and training, than they make selling their offspring usually. Most rescues have not received this attention and in the end have more issues than an animal that was produced by a reputable breeder. There is a difference between producers and breeders. Good breeders stand behind their animals and mentor you and replace the animals that aren't working. Craig's List specials usually are sold as is.

Potential owners of animals think they will save money by adopting or obtaining rescue animals. What they do not realize is that these animals may end up costing them a fortune in the long run. In the dog world, there is genetic testing for hips, eyes and other common issues. A dog from a reputable breeder is more expensive, but when you factor that out over 10-15 years, you actually save money in the long run. True breeders spend a lot of money on their genetic tests. Our eldest Standard Poodle was only $450 when we bought her. Most Standards from reputable breeders are $1500 and up. We learned when we got her papers that her parents were brother and sister. Over the years we have spent thousands of dollars on her trying to sort out a bladder issue. She also has hip and eye problems. Had we bought from a reputable breeder, we would have avoided this. We love her and would never change a thing, but knowing what we know now, we will pay the extra money for one that has had genetic testing. This same experience holds true when buying a llama, you get what you pay for!

Our female llamas get lots of prenatal care. We feed them excellent quality hay, minerals and make sure they are in proper condition for birthing and caring for a baby. We also perform routine care (toe trims, shots, shearing, fecals, etc.) on our animals as a prevention. They see a vet regularly too as needed. Copious research has gone into selecting females with good genetic and milking histories. When a female is added to our program, we have turned down 1000-1500 other potential ones prior. We breed animals that not only have the phenotype (physical appearance) we like, but also have the genotype (genetics) that produce healthy, sound and smart llamas.  A llama should hold up for their selected job well into their late teens and be healthy with routine care.

Good llama breeders work with their babies so that routine items (toe trims, grooming, haltering/leading etc.) are not an issue. When llamas are babies, they are like sponges. This requires time and knowing how to properly socialize a baby. Newbies tend to over handle or ruin babies by not handling them enough. The time spent training a baby llama if done right, never equates out to what a breeder makes on it. Then when you factor in the prenatal care and other expenses, it is a labor of love!

Owning a llama that you can easily halter, trim toes on and work with is a pleasure. Rarely do these types of llamas end up as rescues. Rescue animals usually have no documented history of care, genetics or other information. While some do work out as pets for new owners, most of the time, they aren’t for someone that truly wants to pack, show, drive, do 4-H or other activities. I have numerous rescues I have placed locally in homes and many are in various states of being crippled and overweight. Most cannot be caught by the owners easily and we go once a year to do toes, shear and assess them. Some are okay to work with, but most are not easily caught or vetted. Often from the lack of proper nutrition they eat too much or just gain too much weight, causing other issues. Many of these owners would tell you if they had to do it over again, they would get some that had been properly socialized and raised. This is just my personal experience with my local area of about 75-100 rescues placed there.

When you put in numerous hours training an animal to pack, drive or do other things. There is nothing more disappointing then to have them fall apart or not work out for the job you intend for them. Buying from a reputable breeder who breeds specifically for animals that can do these jobs, helps to insure you will have success in the area you wish to own llamas for. Over the years I have watched some folks every 2-3 years pick up new rescues for various jobs, only to have them fail or fall apart after a year or two. Most I do not think have connected the dots that they are repeating this frustrating cycle every few years. Again, when you factor out the cost vs. number of years you have them, buying from a reputable breeder may make better sense. Over at least a 15 year period, a $3500 packer works out to roughly $233 a year. Well worth the investment if you are serious about getting into the backcountry!

Rescuing animals can be very rewarding and there are some jewels in the rough out there. Potential owners need to know that their new animal may end up costing more in the long run than one from a reputable breeder. It is good to weigh the options and decide what works best for your situation. Not all breeders are bad and certainly the good ones do so to improve the species of whatever they produce. Breeding animals is not wrong if done responsibly for a purpose. Part of that is selling animals into situations that they are suited. Success of ownership is important!