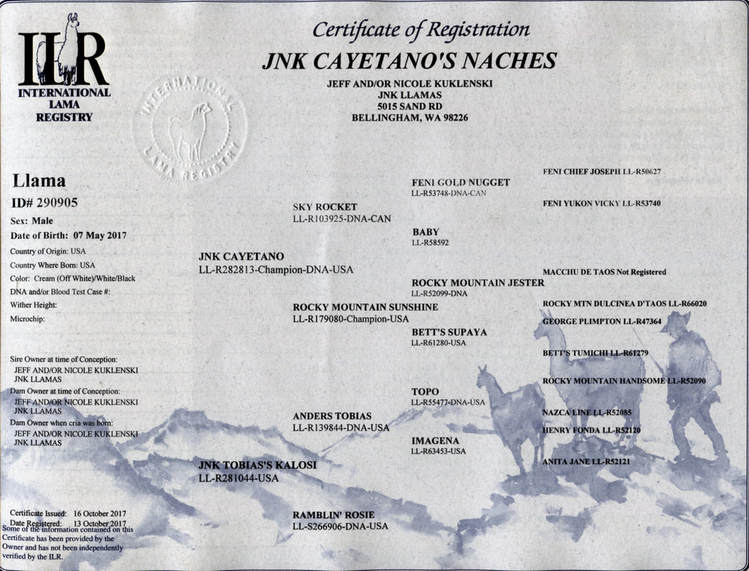 JNK Cayetano's Naches (M)
ILR#290905
JNK Cayetano x JNK Tobias's Kalosi
DOB 5/7/17
***Congrats to Redwood Llamas of Colorado***
This young male is the second of our JNK x JNK bred parents. His sire is our junior classic pack male, JNK Cayetano. Cayetano has completed several legs of his PLTA Advanced certifications and is a complex registered therapy llama with Pet Partners. He has also won over 22 grand champions in halter. Most recently, he is also a double Halter Best of Show winner!

Cayetano is by a PLTA Master Packer (MPL Sky Rocket) and out of one of our very best producing classic females (Rocky Mountain Sunshine). Grandma produced many of our keeper herd animals and was a show and regional champion winner in halter. Her sire (great grandsire to this baby) was the great, Rocky Mountain Jester who was a packer, driver and all around llama. Great grandma, Bett's Supaya lived to be 24 and was upright and still going strong until the end.

Kalosi is a keeper in our herd and by our supreme producing pack male, Anders Tobias. Toby has the strongest rear end we have ever seen on a pack llama. He also has the best work ethic and stamina of any llama we have seen besides Isle Eagle (our foundation woolly herdsire). On top of all this, Kalosi is an absolute sweetheart and loves a good hug and butt scratch from you!  She also loves water and dances in the hose when offered the opportunity.

Arriving with a birth weight at 38lbs, he and was up and nursing immediately. The first week after his birth, he gained 1.5lbs a day! His 2016 full brother was also 38lbs and is now in Colorado hiking.

At weaning, this promising young male will be heading to Redwood Llamas of Colorado to pack and produce packers for them.

Name Origin-
We felt like this male should have a NW reference name and something that is easily said. The Naches Trail crosses the Cascade Range through Naches Pass, roughly from today's Bonney Lake in the west to Yakima in the east. Later the name was applied to the route from Walla Walla to Steilacoom, as an extension of the Oregon Trail. This route was used by Native American peoples to travel from one side of the mountains to the other, for food and trade purposes. One of the earliest written accounts of the use of this trail tells of the travel of a Lt. Johnson of the United States Exploring Expedition (Wilkes Expedition), crossing on horseback, as the Expedition explored the Pacific Northwest in 1841. 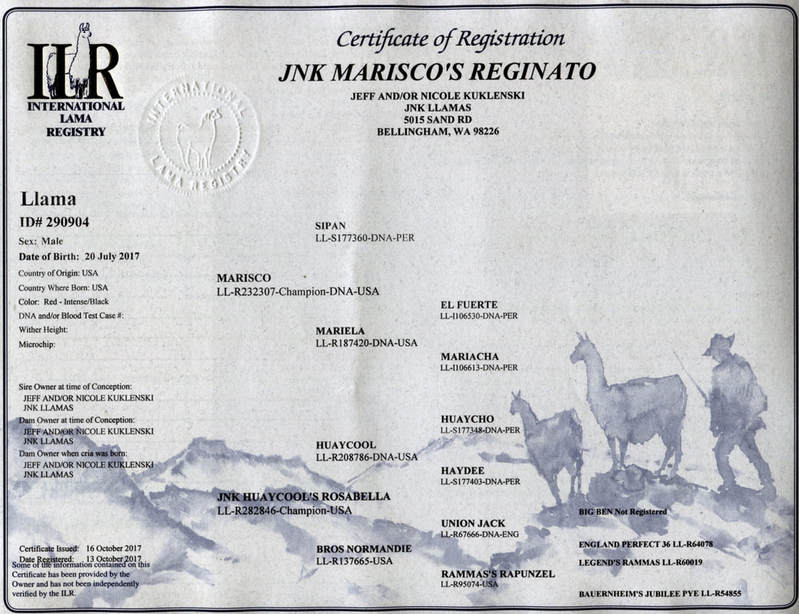 Our second Rosabella offspring! This is a second generation JNK llama offspring descended from our best producers. There are over 45 Grand Champions & 16 Reserve Grand Champions in Halter and 16 Halter best of shows in this pairing (Marisco x JNK Huaycool's Rosabella). Not to mention numerous performance and versatility titles between this sire and dam. Best of all, both mom and dad are Complex registered therapy llamas! They are extremely sweet and mellow.  These are two of our very mellowest and most award winning llamas in our herd! Also, two of our very favorite llamas! He is special and needs the right home.

Marisco has far exceeded our expectations for a male following in Isle Eagle's footsteps! Not only is Marisco a many times champion in halter, he has many best of shows too! In addition Marisco did performance and is an accomplished therapy llama! He is one of our two senior Pet Partners Complex Registered Therapy Llamas. You won't find a kinder, gentler soul than this boy. He is so mellow, you can hug his back leg and he won't bat an eyelash!  At age 16 Marisco is still very upright, handsome and correct. We showed him in the Fall of 2017 and he was double Grand Champion Heavy Wool Male and Best of Show to boot!

Grandam was our very best producing female Bros Normandie. Normandie made some of our most successful show/therapy/breeding animals and was Bauernheim Llamas best female. She also produced really fine fiber! Grandsire is our ALSA Halter Champion and full Peruvian male, Huaycool. Huaycool was purchased in 2010 from the Hinterland Llamas dispersal sale. He has a very mellow and easy going personality. The great grandsire to this baby is a full Peruvian male named, *Sipan. *Sipan is a two time national halter champion (the second time at age 16) and ALSA Halter Champion. Great great grandsire of this baby is *El Fuerte.  In a very limited production, *El Fuerte has produced more show winning descendants than any other bloodline in history. This is the most prepotent and strongest line for conformation in history!

The full brother to this boy "JNK Marisco's Rustamone" won double Halter Grand Silky Male in the largest halter division at his first show. Mom and all his half siblings (by Marisco) all won a total of six grands and a reserve in halter at the same show!  Mom was overall Best of Show/Highpoint Female for the NW and his half brother Ramazon was Overall Best of Show/Highpoint Male for the NW.  Rustamone is now in CT with Donna Zurstadt and is already starting his halter, performance and therapy career with her. She adores him!

If you want a no brainer for an all around male with generations of proven halter/performance, therapy and fiber, contact us about this amazing young male! He is only available to the right situation! He is special and needs the right home.

Name Origin-
Reginato was named by a high school friend and Breast Cancer survivor who has an Italian family member by this name. 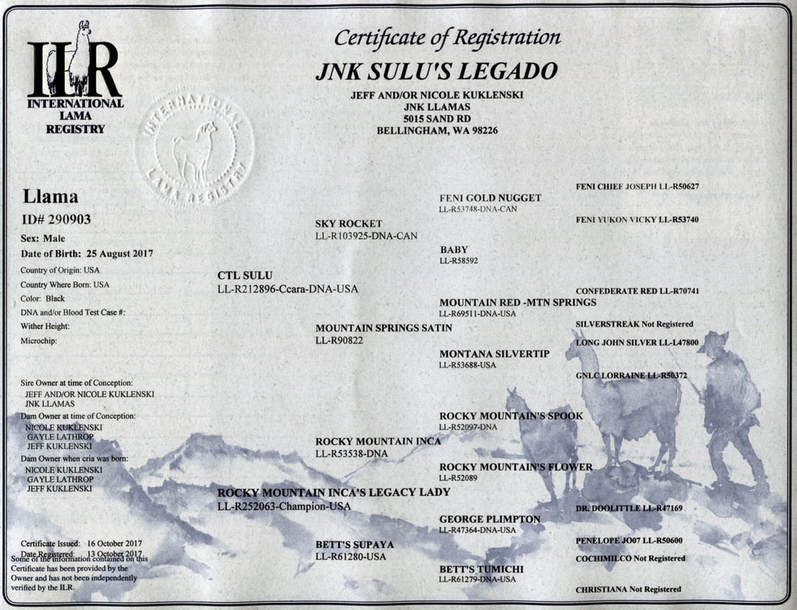 JNK Sulu's Legado (M)
ILR#290903
CTL Sulu x Rocky Mountain Inca's Legacy Lady
DOB 8/25/17
***Sold Congrats to the Ruckman & McFarland Families***
Legado was born and less than a week later his mother was spooked by our new miniature horse. When she took off, she managed to shatter both her front legs and a month later had to be euthanized.  In our many years of llama ownership, we have never had a situation like this. Nor have we had to supplement a baby.  Luckily one of the other nursing mothers is allowing him to nurse in addition to the supplementing.

So far Legado has adjusted remarkably well. He is halter/lead broke already and easy to deal with. On top of that, he is a beautiful jet black, short coated classic with LONG legs. He looks to be pretty straight too!


Name Origin-
Legado is Spanish for Legacy. We thought this was fitting given he is his dam's last offspring and her name was Legacy. 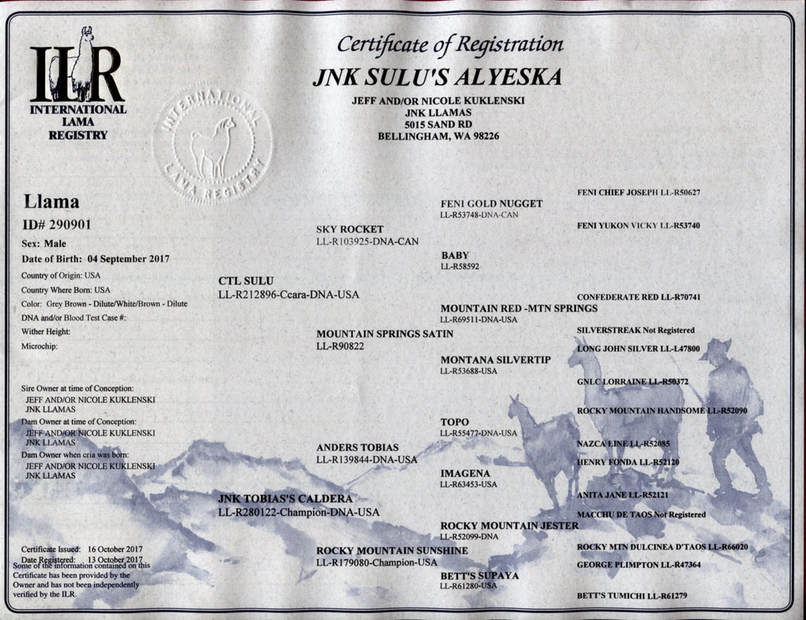 Alyeska has a very short classic coat with really cool coloring. Given who is parents are, he should be a quiet and willing male. Dara and her two brothers (Cayetano and Trask) are all registered therapy llamas, packers and two are ILR Performance Champions.

We know this male is a complete outcross to most of the pack lines currently available and he comes from some pretty stellar packing lines.  Both of his grandfathers are PLTA Master Packers.  His great grandsire Rocky Mountain Jester was the original all around llama (driving, packing, showing etc.).  Grandma was our highpoint halter female and many times champion, Rocky Mountain Sunshine.

Sky is mellow and has basic handling and training already. He would be the perfect llama for a small breeder that is active with their llamas.

Unfortunately, everyone that is on our packer wait list wants packers and doesn't breed.  Given how rare this guys genetics are, I would prefer he go to a breeding/packing home.  Essentially, we are being picky about where he goes. If you think you might be a good match, let me know!

Name Origin-
This Summer we visited Alaska and in honor of our travels, we have named several llamas with references to this area. Alaska. Alyeska is an archaic spelling of the Aleut word Alaska meaning "mainland", "great country", or "great land". 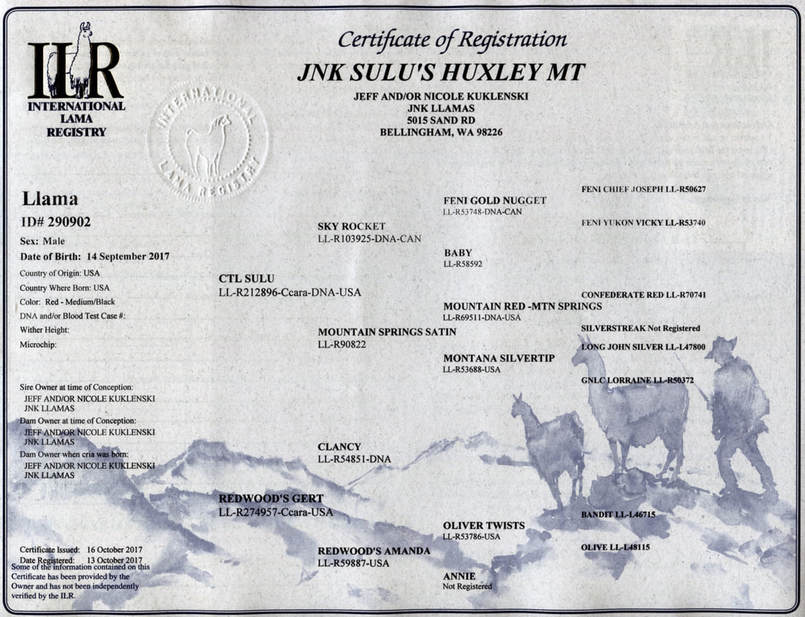 JNK Sulu's Huxley Mt (M)
ILR#290902
CTL Sulu x Redwood's Gert
DOB 9/14/17
***JNK Keeper***
In the Summer of 2016, we went to Colorado to obtain what we thought would be a Clancy granddaughter. Instead, we came home with 19 year old Gert!  Even though she was older, Gert was still in great shape and definitely breedable.

Our goal for breeding her was to get an outcross classic male. We paired her with CTL Sulu hoping to get a new male that could be used on our Toby daughters.  Gert achieved this goal by giving birth to a beautiful and correct male this year. To ice the cake, he has a wonderful short coat.

Huxley will be Niki's 2018 project llama and show llama. When he is old enough he will begin his training for packing and therapy work.

Name Origin-
We visited Alaska this Summer. Sometimes on the years we travel, we name llamas after where we have visited. Huxley is named after Mount Huxley in Alaska.

This upright and fancy girl is out of a friends classic female. She is the first female offspring of JNK Cayetano our 22 Halter Grand Champion winning and proven pack male. He is also a registered Complex therapy llama!

Aria (Molly's dam) is a classic female with some woolly ancestors. If Molly is bought for breeding, the owner will want to keep this in mind. Aria is a good mother with loads of milk and a nice short shedding coat. She has a super disposition and has produced packers and therapy llamas in the past.

Molly screams sass and style. She has amazing bone and structure too. If shown, she should do very well in halter and performance as she is very confident. Topping it off, she is beautiful!

Her owner likes to have a baby or two a year and train them.  She does not like to sell, so she has me handle that part.

If you would like more info on her, let US know!