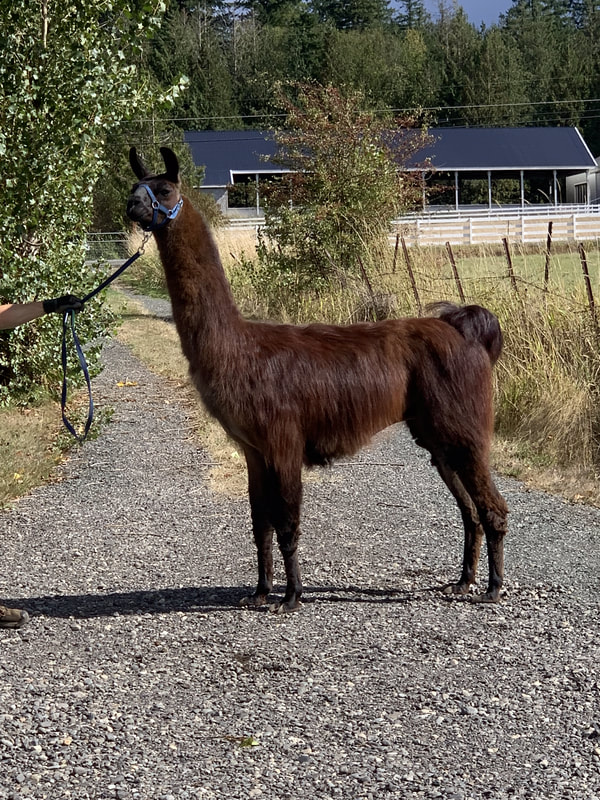 CTL Sulu x Rocky Mountain Inca's Legacy Lady
We were pretty overjoyed to get Fin back from our good friend Janet.  Fin was sold as a juvenile and lived in the San Juan Islands for the next 5 years.

For various unforeseen reasons, Janet had to give up her two boys from us.  To our delight, Fin was still intact and now an adult. Even better, he has the best classic coat and strong movement.  Like all our other males, he has a strong rear end which is the most important feature on a packer.  Most of today's packers rope walk or have weak hips/rear ends.

Fin's parents were both amazing classics we owned.  His sire was a mellow and sweet male from a commercial pack string.  Sulu produced numerous halter winners and therapy llamas.  Fin's dam was our Rocky Mountain Inca's Legacy Lady.  We bought her directly from Bobra and over 3 years we won nearly every show she went in.  In 2007 she was ALSA National Reserve Grand Champion Light Wool Female.  This was when the classes were full with good competition.  Legacy was a beautiful classic and we have kept two of her offspring.

Fin will start packing with us and may be available for service in the future to select classic females.  He is related to most of our current females.