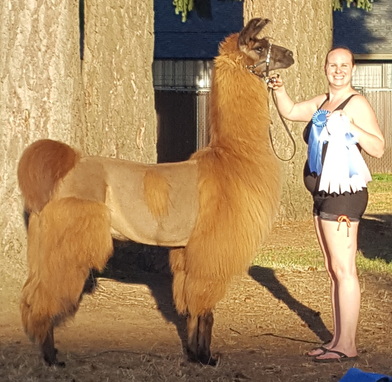 ﻿﻿JNK Marisco's Ducati (M)
ILR#287424
Marisco x Bros Normandie
DOB 6/1/14
***SOLD Congrats to Roy & Holly Williams***
﻿﻿
Normandie birthed a beautiful baby boy. Hands down, Normandie has been our best producing woolly program female. Her cria are all over the country and have cleaned up in the showring. We sell her babies before they are even born usually. Normandie's offspring are some of our most asked about animals in our herd. Her sons and daughters are producing in Australia and across the United States.

Normandie's 2009 daughter, JNK Marisco's Venicia has been winning in halter and performance for the McWhorter's. of Washington. JNK Huaycool's Frisella has numerous halter and Best of Show wins too for David Armer of Nevada. David and partner Matt also have Normandie's 2007 son, JNK Zumiez's Sirmione that has won many halter titles. We kept Normandie's 2011 daughter, JNK Huaycool's Rosabella. Rosabella has all of her ILR halter titles and earned them in five shows!

There is no linebreeding in this cria, it will be a highbred of English, Peruvian and North American lines. All of the full siblings are in breeding programs already and are LOVED!

This male has to die for presence, straight and long legs, an upright neck and all the things you would expect from this pairing. Look out 2015 shows! This pairing is a no brainer to win and produce awesome llamas!

We have retained breeding rights to this handsome male!

Update:  He is a finished ILR Performance Champion! 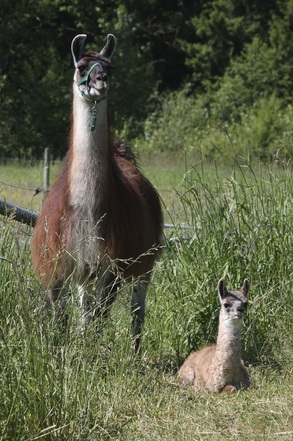 A home run from our favorite classic pairing. This guy came into the world with a beautiful classic coat and correct conformation. The 4th full pairing of Toby and Sunshine, created this substantial male. His older sister "JNK Tobias's Caldera" is in our keeper herd and is Niki's up and coming performance prospect. Caldera was in the top 2 on the ILR performance lists for 2011 and the 2011 ILR Gathering of Friends Reserve Grand Classic Female. Best of all she is a packer and driver too! The dam of this male was the 2009 NW Region High Point Classic and many time halter class winning female. His half brother JNK Cayetano is one of our junior classic herdsires and has been a stellar show/therapy llama for us too!

This male has really old and proven packing lines! A bloodline combination with no linebreeding and such packing greats as Rocky Mountain Handsome, Rocky Mountain Jester and Bett's Supaya. At this time, he isn't for sale.

Trask is a Halter/Performance Champion and Pet Partners Therapy Llama 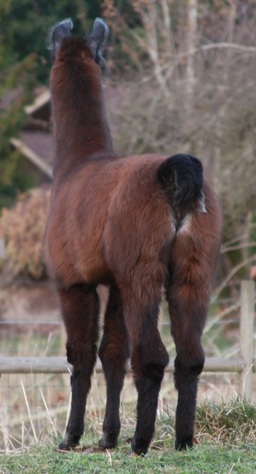 JNK Marisco's Fabrizia (F)
ILR#287526
Marisco x CMF Eagle's Kestrel
DOB 9/1/14
***Sold to Rebecca Wood***﻿﻿﻿
Fabrizia is a lot like her older sister "Kiwi."  She will mature into a very tall and leggy lighter side of medium wooled female.

The full siblings to Fabrizia are all show winners and excellent performance llamas.  They get their grandsire's brains and athleticism.  Additionally, with Marisco as a sire, they get conformation, substance and sweetness! Bree was raised here, but owned by Terry & Sandra Spekreijse. 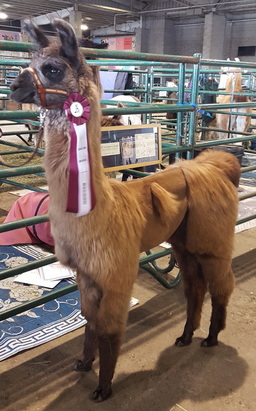 JNK Marisco's Aglianica (F)
(Prounounced Ali-On-E-Ca)
ILR#287507
Marisco x BAL Katmandu
DOB 11/14/14
***SOLD, Congrats Carol Reigh of Buck Hollow Farms***
This young female is a total package. We bought Kat based on her pedigree with a strong suspicion that she would cross well with Marisco our senior herdsire. The result confirmed that!

Ali is very upright, stretchy, nicely boned and to top it off has lovely locked fiber.  We really liked this girl and will keep her next sibling that is female for our own herd.

Carol has waited a few years to get a Marisco kid and when Ali was born, we felt she would be the perfect match for Carol's program.  We are looking forward to seeing all their wins in the showring!