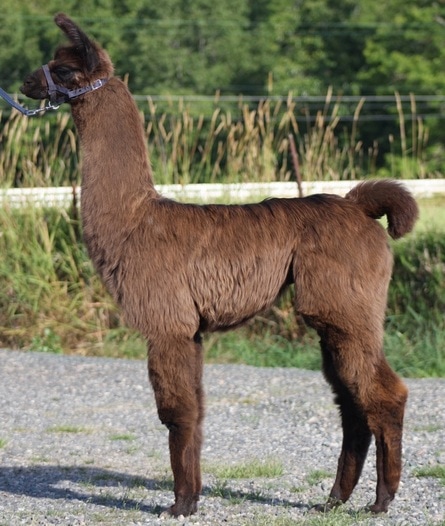 2016 #1 Juvenile Male in ILR-UAP Top 10 List
Finished ILR SD/UAP Halter Champion
Our first Rosabella offspring! This is a second generation JNK llama offspring descended from our best producers. There are over 43 Grand Champions & 16 Reserve Grand Champions in Halter and 14 Halter best of shows in this pairing (Marisco x JNK Huaycool's Rosabella). Not to mention numerous performance and versatility titles between this sire and dam. Best of all, both mom and dad are complex registered therapy llamas! They are extremely sweet and mellow.  These are two of our very mellowest and most award winning llamas in our herd!

Grandam was our very best producing female Bros Normandie. Normandie made some of our most successful show/therapy/breeding animals and was Bauernheim Llamas best female. Grandsire is our ALSA Halter Champion and full Peruvian male, Huaycool. Huaycool was purchased in 2010 from the Hinterland Llamas dispersal sale. He has a very mellow and easy going personality. The great grandsire to this baby is a full Peruvian male named, *Sipan. *Sipan is a two time national halter champion and ALSA Halter Champion. Great great grandsire of this baby is *El Fuerte.  In a very limited production, *El Fuerte has produced more show winning descendants than any other bloodline in history.

We have every hope that this young male will be as promising as his pedigree says he is!  Congrats to his new owner Donna Zurstadt of Connecticut. 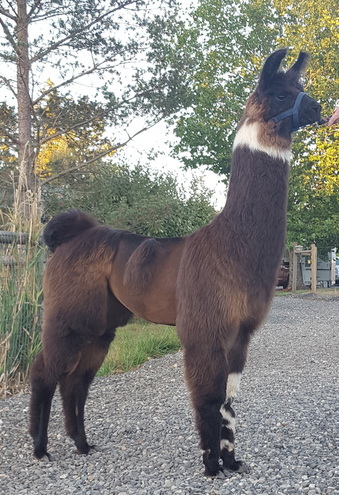 Another slam dunk from Marisco and BAL Katmandu. With what we know about these two lines and their consistency in production, it was a no brainer that we would be keeping Katastrophe aka Sophie.  Our friend Kendara talked us out of her, so we have reluctantly sold her!

Sophie has the well respected Constance line on her dams side of the pedigree through Silver Peru. Silver Peru has been an excellent producer through the years with numerous award winning offspring and an ALSA National Get of Sire win in 2003 (Sophie's mom was part of that trio). Her great grandsire GNLC Catman was the first high selling male at public auction with a $170,000 purchase price. Catman was a Zorro PL son and this line is known for producing fiber and conformation! Sophie's mom has her ALSA Halter ROM and was a futurity winner too.

On her sire's side you have *Sipan a two time national halter winner and ALSA Halter and ROM recipient (Marisco helped win those titles).  Sophie's great grandfather *El Fuerte has produced more Halter Champion and National Champion descendants than any other llama in history.  Sophie's dad is an ALSA and ILR Halter Champion, many times best of show, Complex registered therapy llama and performance winner. He has also produced numerous halter champions for us and our customers.

Sophie's half brother Marcelino is a complex registered therapy llama with Pet Partners and her full sister Aglianica has done well in fleece, performance and halter classes.

Sophie had a rough start in the world. We came home one night to find her mother with two feet sticking out and no nose. In a perfect breeding scenario you have "nose and toes." The feet were not moving and mom did not seem to be pushing either! We loaded mom up and headed to our vet. Once there the vet was not overly optimistic and it was decided that the baby was probably dead. DVM Michael Anderson got to work and quickly determined that the neck of the baby was bent over and stuck. As he worked to re-position the baby and get it out, mom began to go into labor around midnight. Shortly after this, we heard gasping and realized the baby was in fact alive!

Once out, Sophie quickly let the world know she was here! She immediately began trying to stand and walk. Fighting both the vet and poor Jeff. Weighing in at 28.3lbs, she was most definitely okay and healthy! Sophie also looked like a giraffe with her long neck and legs, something I very much love in my breeding llamas.

On the van ride home, Sophie wandered around and explored all over. She even managed to climb the wheel wells. We are thinking she will be an obstacle queen and therapy llama! Sofie was born on our beloved Eagle's 22nd birthday, she has all the luck behind her to be GREAT!

2016 Oregon Flock & Fiber Show
Grand Champion Single with Crimp Fleece On.
Sophie's siblings all cleaned up in halter, but unfortunately Sofie did not want to walk in her halter class!  See above under Rustamone.

This young male is the first of our JNK x JNK bred parents. His sire is our junior classic pack male, JNK Cayetano. Cayetano has completed several legs of his PLTA Advanced certifications and is a complex registered therapy llama with Pet Partners. He has also won over 20 grand champions in halter.

Cayetano is by a PLTA Master Packer (MPL Sky Rocket) and out of one of our very best producing classic females (Rocky Mountain Sunshine). Grandma produced many of our keeper herd animals and was a show and regional champion winner in halter. Her sire (great grandsire to this baby) was the great, Rocky Mountain Jester who was a packer, driver and all around llama. Great grandma, Bett's Supaya lived to be 23 and was upright and still going strong until the end.

Kalosi is a keeper in our herd and by our supreme producing pack male, Anders Tobias. Toby has the strongest rear end we have ever seen on a pack llama. He also has the best work ethic and stamina of any llama we have seen besides Isle Eagle (our foundation woolly herdsire). On top of all this, Kalosi is an absolute sweetheart and loves a good hug and butt scratch from you!

This boy came into the world after a whole day of labor. He took the farm record for birth weight at 38lbs and was up and nursing before we even saw him! 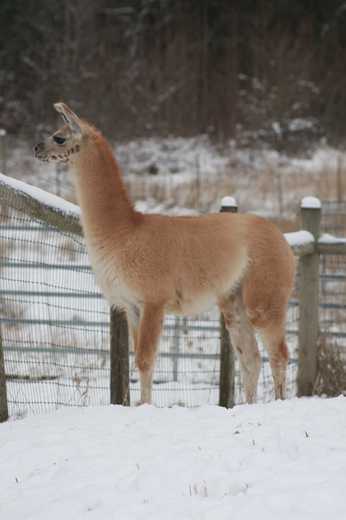 This darling female is a classic by our top pack male Toby  and out of our 2008 ALSA National Reserve Grand Champion Light Wool, Inca (Spook line) daughter. Legacy has one of the shortest coats on the farm, perfect for packing and grooming.  She is also one of the straightest classics you will ever see too!  Toby is 22 and while going strong still, this may be his last offspring, so we are keeping her. There are no other classic males out there of Toby's quality, brains, work ethic and consistency.

Toby and Legacy both had excellent show records in conformation and both hail from some very old and proven packing lines. This girl is a gold mine that will fit nicely into our exclusive classic breeding program!

The meaning behind her name:
Toviyah (Toviah is our spelling change) you have a great love of nature and the out-of-doors.
JNK Marisco's Lucchese (M)
ILR#289960
Marisco x JNK Eagle's Chantika
DOB 9/5/16
***DECEASED***

Tika is one of our very smartest llamas. She is also one of the mellowest ones we own!  As one of Niki's previous performance llamas, she consistently shined in the showring.  She also won a lot in halter (ILR Halter Champion and one grand from an ALSA Halter Champion) before being retired to make stellar halter/performance llamas for our farm.

Lucchese has two full siblings that have done extremely well in various capacities. This is one of our most consistent performance lines and to top it off, they LOVE water! They mature out to be beautiful and stretchy adults.

Lucchese is a beautiful male and is very balanced.  He has a sweet even disposition so far too!

The meaning behind his name:
We have a love of western boots and Niki has a pair of Italian boots made by Lucchese!

This guy came out of the womb with his grandfather's upright and attention demanding presence. His older brother "Serenity Park's Ramazon" is a many times show winner (40+ Grands and Reserves) and in our opinion the very essence of what a good/correct llama should look like!  He is also a third generation driving llama on the dam side (both her sire and dam side drove) and is an excellent driver too!

Pretty much every llama in this pedigree drives, wins in the showring and is just an all around AMAZING llama! Many of the full siblings to this cross are around the country in other breeding/showing programs. To top it off, he has gorgeous, pencil locked, high luster fiber!  It is around a 16-17 micron count.

While it is tempting to keep this beautiful male, we just do not have the room and his older brother lives with us for now!

Murano ended the 2017 show season with only two halter/fleece shows under his belt.  He was #2 in the UAP Top 10 in Fleece On & #7 in Bagged Fleece.  Murano won a total of 3 Halter Reserve Grand Champions as well!  Congrats to Kay and Jessie Munson!

The meaning behind his name:
﻿﻿Murano is a series of islands linked by bridges in the ﻿Venetian Lagoon﻿, northern Italy. It lies about 1.5 kilometres (0.9 miles) north of Venice and measures about 1.5 km (0.9 mi) across with a population of just over 5,000 (2004 figures). It is famous for its glass making. It was once an independent comune, but is now a frazione of the comune of Venice.﻿﻿ 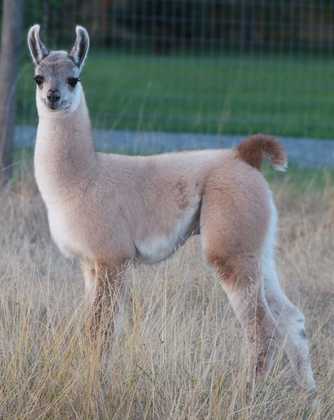 Even the best thought out breeding plans can go another direction.....

In the Spring of 2015 we bred Dara to CTL Sulu one of our senior pack males. April 2016 came and went....Still waiting....We had her checked and she definitely had a baby in there. Finally in July we remembered that Cayetano's (another one of our pack males) gate between his pen and the girls had come down in September 2015. All the other girls had been aborted in that pen, but since Dara was already bred (so we thought) we did not abort her.

In September Dara had a beautiful and straight male. Not the cross (brother/sister) we had envisioned, but healthy and definitely able to pack and be gelded when of age. We do not condone or cross siblings in our program. In fact, most of our animals are total outcrosses with no line breeding. When he is weaned, he will head to CO to pack!

The meaning behind his name:
Tomichi Dome rises north of Colorado State Highway 50 west of Hot Springs Creek and south of Wanita Hot Springs Reservoir in the southeast quarter of Gunnison County, Colorado. It is situated within the Gunnison National Forest and is of a geologic formation called a Laccolith.