2013 JNK Llama Babies
It is always a long wait when you are watching for the babies to come. Knowing you carefully matched a sire and dam and what that perfect match potentially will cria't. This result should be the epitome of what you are breeding toward after careful and strategic planning. We continue to be blessed with beautiful animals and wonderful buyers! 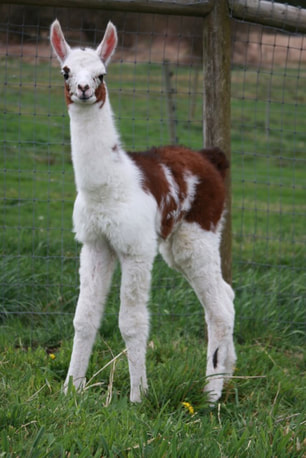 Laka is the Hawaiian goddess of the forest. We let Kendara her new owner name her with the stipulation she had to have a forest or mountain related name. We think she did pretty well.

Like most red heads, Laka has her own thoughts on the world. She is a gorgeous bright red and already has a nice short classic coat. Like older brother Donard, she should be a really nice classic as she matures. We retained her older sister Kalosi for our own keeper herd of classics. 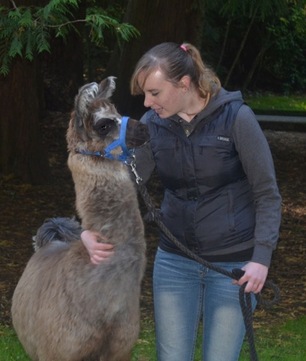 Marcelino came at the side of his dam when we purchased her from the Carmichaels of KY.

Like his Grandsire "Silver Peru," Marcelino is a beautiful color of grey. Silver Peru offspring have swept the showring by storm and have been high sellers over the years at llama sales.

Marcelino's dam "BAL Katmandu" is out of the famous Catman line of high selling Celebrity Sale fame. Her dam was one of the top producers of the famed Berry Acres breeding herd. Full siblings to Kat have sold for thousands.

"Aureano" is a full Peruvian appaloosa male that has produced some very nice and correct offspring over the years. He was originally owned by Rain Dance Ranch and later owned by the Carmichaels. Over the years he has thrown some exceptional offspring.

UPDATE:  Holly and Marc are now a llama therapy team with Pet Partners!  They also have won in Halter and Performance showing. In 2017 Mark was High point Versatility Llama for Performance/Halter. Congrats to you both! 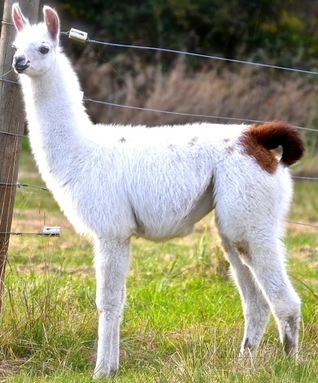 Lena is a classic female by our outcross packer male "CTL Sulu" and out of our 2008 National Reserve Grand Champion Light Wool, Inca (Spook line) daughter. "Rocky Mountain Inca's Legacy Lady" has one of the shortest coats on the farm, perfect for packing and grooming. Legacy had an excellent show record for conformation and hails from some very old and proven packing lines.

Sulu is by PLTA Master Packer "Sky Rocket." We purchased Sulu from a commercial pack string in Wyoming to cross with our Toby daughters.

Lena is a beautiful girl with substance and a nice classic coat. Very leggy, tall and short coated, she has potential to be a great packer. Her 2009 sister "JNK Tobias's Kahkneeta" lives in Arizona and her 2011 full brother "JNK Tobias's Baker Mt" resides in Colorado now and is starting his packing career there. 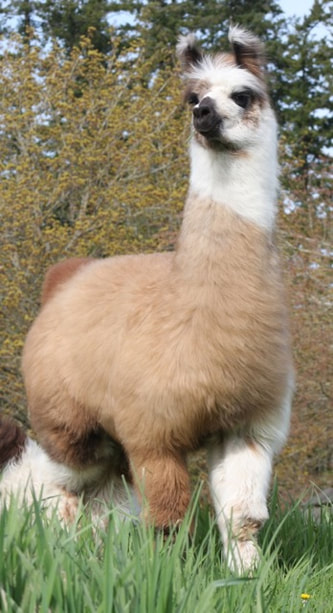 This fancy and colorful male is out of one of the best producing "Isle Eagle" daughters owned by our New Zealand friends, Terry and Sandra Spekreijse. "Kestrel" is the dam to another male (and full brother), "Serenity Park's Ramazon." Ramazon is a finished ILR halter champion with all six titles and many Best of Show titles to his credit. He was one of the top adult males in the country in 2012 on the ILR-SD top ten list. The 2012 half brother to Ramazon and Versace "JNK Huaycool's O-So-Kool" is winning everything in halter, fleece & performance for the Schlemmer family of Indiana.

Versace's sire is our many times champion and best of show winner "Marisco." Marisco is a full Peruvian male by two time National Champion *Sipan and out of a super producing *El Fuerte daughter. *El Fuerte has produced more champions in the halter ring than any other line in show history. Marisco has consistently produced show winners for JNK and other farms across the country. Crossed with Eagle daughters he makes magic!

There are lots of performance and driving animals in this pedigree. Versace's dam, brother, grandfather, 2 grand uncles and 8 aunts and uncles all drive. His dam's grandfather was also a driving llama and one of the first ALSA Champions. This is a very strong performance, conformation and driving line.

Versace was sold to Roxywood Farms in TN. 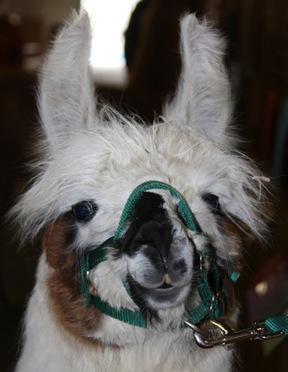 A beautiful male by our full Peruvian outcross male (ALSA Halter ROM & Champion) "Huaycool" and out of our top showring winning "Isle Eagle" daughter "JNK Eagle's Chantika," who has won everything in both ILR and ALSA. One of the 3/4 siblings to this boy (Serenity Park's Ramazon) has won Reserve and Grand in every halter class he had entered in 2010, 2012 & 2013 and has 6 Best of Show titles to his credit. He will go to New Zealand eventually. The other 3/4 sibling "JNK Huaycool's O-So-Kool" is winning everything in halter & performance for the Schlemmer family of Indiana. We own a half sibling, "JNK Huaycool's Rosabella" that has been cleaning house in halter and now performance here in the N.W. She finished the 2013 show season with 2 Best of Show Titles.  Since then she has finished all of her ILR-SD halter and performance titles and ended the 2014 show season as Best of Show Female and Overall Northwest High Point Llama!

This young male has a who's who of lines, Isle Eagle, Ivory Pond's Aladdin, Legend's Rammas, Bauernheim's Nina and more. Isle Eagle was the top show llama in the nation and still holds more titles and wins than any llama in history. Eagle kids are still winning in the showring today. Ivory Pond's Aladdin was known for producing excellent fiber and stretch. Legend's Rammas is an old Bauernheim line known for pencil locked fiber and structure. Presto has beautiful and greasy feeling black and white fiber. Very high luster too!

Emily one of the 4H members began working with Presto as a baby and fell in love with him. Because of this it only seemed natural she would end up with him!

Presto was named by Drew (and his mom) one of the 4-H kids who uses our llamas and helps out here. Good job Drew! Presto means early in Italian.